Online workshop on Transnational and Diaspora Politics and Activism

On 24-25 August, the Histories of Activism Research Group – in partnership with the Global and Transnational History Research Group - is hosting an online workshop that brings together 20 scholars conducting exciting new research on histories of transnational and diasporic political movements and activism. The topics explored at the workshop range from studies into pro- and anti-apartheid activism, to student and green politics, to black power and anti-colonial solidarities, to the politics of museum collecting, and much more. Please see below for the full programme.

Registration is free and open to all. It will take place on Microsoft Teams: links and further details will be shared with you once you register. To register, please visit the Eventbrite page here: https://www.eventbrite.com/e/transnational-and-diaspora-politics-and-activism-workshop-tickets-162542169003

The research presented at the workshop forms part of a body of scholarship, much of which has emerged only recently, that considers global and transnational dimensions to political movements and activist networks. Some of this explores various forms of international advocacy, civil rights campaigning, ‘long-distance nationalism’, anti-colonial struggles, sites of interaction and cooperation, and the transnational layers of connection and influence played by migrant and diaspora communities. This has been manifested in the realm of formal political processes, such as election campaigning and voting, as well as in numerous forms and hues of activism. Understanding these histories may have repercussions for how we make sense of transnationalism, citizenship, diaspora, sovereignty, cosmopolitanism, political ideology and praxis, and democracy itself.

The workshop has a particular (but not exclusive) focus on the 1970s. This decade - following the upheavals of the late-1960s - seemed to witness a number of significant expressions of transnational mobilisation, many of which have received little or no academic attention. By reflecting on the 1970s - in the context of decolonisation, the Cold War, evolving diaspora communities, and new forms of globalisation and transnational connectivity - we hope to explore concrete or theoretical ties between different episodes and movements during this important historical period. 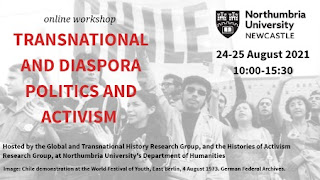 Transnational Solidarities and Racism in the Long 1970s

Transnationalism, the State and Non-State Actors

Posted by Histories of Activism at 07:46 No comments:

Online Symposia on 6 and 20 November: Non-Conformity, Critiques and Contention under Communist Rule in the 1970s and 1980s

With support from the Society for the Study of Labor History, Northumbria University's History of Activism research group is hosting two online symposia on different ways in which communist rule in Central and Eastern Europe was being critiqued and contested during the 1970s and 1970s. To register for these online symposia, please contact Daniel Laqua.

Critiques and Future Visions in the Late 1980s

Posted by Histories of Activism at 08:49

Call for Papers: conference on "Social Movements and the Challenges to State Socialism in Central and Eastern Europe"

Following the dramatic events of 1989, the political landscape looked significantly different and continued to be in flux throughout 1990. The German Democratic Republic held its first (and final) democratic election in March 1990, setting a path that ultimately led to reunification in October that year. In June 1990, the holding of parliamentary elections in Czechoslovakia confirmed the outcome of the previous year’s Velvet Revolution. And in Poland, the country’s political transformation was symbolised by the election of Solidarnośćfounder Lech Wałęsa to the presidency in December 1990. Throughout the year, challenges to the status quo in the Soviet Union came from a variety of national, political and environmental movements, extending into many aspects of everyday life.

Thirty years on from these seismic changes, our conference intends to offer a fresh assessment of the way in which communist rule was being contested before the collapse of state socialism. We are particularly interested in the ways that social movements and transnational actors challenged the existing systems and power relations. We invite proposals on different countries in the region, with a focus on movements and events in the 1970s and/or 1980s. Potential angles include the following:
o  The extent to which different activist currents – including pacifism and environmentalism – questioned the principles and practices of state socialism;
o  The responses of Western trade unionists, socialists and communists to dissident movements in the East;
o  The interactions between a new politics of human rights and traditional forms of social and political activism;
o  The ways in which particular modes of cultural expression represented and advanced political challenges;
o  The envisaging of socialist alternatives – or alternative socialisms – within the countries in the Soviet bloc.

Alongside contributions from the discipline of History, we welcome papers that draw on examples from Literature, Music, Art and Film.

Please send your abstracts of up to 300 words as well as a short biographical note to Charlotte Alston (charlotte.alston@northumbria.ac.uk) and Daniel Laqua (daniel.laqua@northumbria.ac.uk) no later than 10 February 2020. We intend to publish a selection of papers that are presented at this event.

The event is hosted by the ‘Histories of Activism’ research group at Northumbria University, Newcastle upon Tyne, with support from the university’s Institute of Humanities and the Society for the Study of Labour History (SSLH).
Posted by Histories of Activism at 03:41 1 comment:

British Ex-Service Students and the Rebuilding of Europe: Reflections by Sarah Hellawell


Dr Sarah Hellawell offers her reflections on her work as Research Associate on the ‘British Ex-Service Students and the Rebuilding of Europe, 1918–1926’ project.

Between May and December 2017, I was Research Associate on the ‘British Ex-Service Students and the Rebuilding of Europe, 1918–1926’ project. This was an exciting opportunity to embark on a collaborative research project with different academic and community partners following the completion of my PhD. This project sought to examine the impact of the Great War on university students. Between 1918 and 1923, there was influx of students at British universities as those who had undertaken different forms of war service returned or embarked on studies for the first time. In particular, the project focused on the influence of ‘ex-service’ students on university life and the impact of the war on international student activism.

Funded by the AHRC ‘Everyday Lives in War’ World War One Engagement Centre at the University of Hertfordshire and led by Dr Daniel Laqua (Northumbria University) and Dr Georgina Brewis (IOE, UCL), this project has also involved collaboration with the National Union of Students and the North East Workers’ Educational Association, whose own research into adult education during the ‘Turbulent Times’ after the Great War aligned with our aims. Research findings from the ‘British Ex-Service Students’ project have been disseminated through blog posts on the NUS website, a pop-up exhibition, public talks at Newcastle’s Literary & Philosophical Society and NUS offices at Macadam House in London, a pamphlet, as well as a forthcoming academic journal article.

Before embarking on this project, I knew little about the history of universities and student activism; at the same time, my own research on British and international activism – namely peace, internationalism and women’s rights – clearly connected with the themes of this project. As such, the project allowed me to build on my existing knowledge while developing it in new directions. My principal role was to conduct archival research into two case studies – Durham University (including Armstrong College in Newcastle) and University College London – using the records held at Newcastle and Durham universities, NUS offices in Edinburgh, University College London and the National Archives. I consulted student newspapers and magazines, as well as records of student societies, student records and the papers of the Board of Education.

One of my favourite findings was the discovery of the prominent role that female students played in student societies despite the fact women only made up around a quarter of the national student population at this time. Notably, at UCL the proportion of female students was higher. There, women made up a third of the student cohort. Moreover, individual female students stood out, including May Hermes (Bedford College), who was instrumental to the international work of the NUS, and Violet Anderson (UCL), who attended the international student conference in Prague in 1921.

Crucially, this research has shed light on Board of Education’s scheme to provide grants for ex-service students. The impressive scale of this scheme has previously been overlooked in the historiography. By 1923, 33,668 students had been awarded financial support. Undoubtedly, this scheme transformed the social composition of British universities, although further work is needed to analyse the background of these students. In addition, this project has shown the range of activities that ex-service students embarked upon after the war. Ex-service students were instrumental to the reinvigoration of university life. Shaped by their experiences of war, many of these activities promoted the cultivation of international links with students in other nations, particularly through the National Union of Students, which was founded in 1922.

This study has also demonstrated that students across England embraced these goals. Both those in London and the North East were interested in peace, internationalism and the League of Nations. Indeed, in 1925 students at Armstrong College in Newcastle asserted
‘Armstrong will produce some of the finest people in the world; men and women who will take office in the National and International Student Movements – why should we be content for Oxford, Cambridge and London repeatedly to supply such people?’
(Northerner, January 1925, 47. University Archives, Newcastle University Library)

Although my time as Research Associate has come to an end, work on this project has initiated various ideas about future projects and outputs based on the history of ex-service students. For instance, there is scope to extend this study to consider students in other areas of the country – including those in Scotland and Ireland where grants were administered separately – as well as those enrolled at technical colleges.

We will present our findings at the History of Education seminar at the Institute of Historical Research in March. We also look forward to displaying our pop-up exhibition, distributing our project pamphlet.

One of my favourite aspects of undertaking this research was the local case study of students in the North East of England. I will present aspects of this part of the research to the North East Labour History Society on 3 April at the Old George Inn in Newcastle. All welcome to come along!
Posted by Histories of Activism at 10:32 4 comments:

How have student activists sought to promote peace and reconciliation? How have they challenged racism? And what efforts did they launch to support refugees? This event brings together academics and activists to investigate the lessons of the past and the challenges of the present.

The workshop will take place at Macadam House, the London office of the National Union of Students (NUS). It is based on a project involving the NUS and researchers from University College London (UCL) and Northumbria University. At the event, there will be contributions from student campaigners and NUS representatives who will share their experiences, while the historians Jodi Burkett, Georgina Brewis, and Daniel Laqua will speak about past examples of student activism.

The workshop will take place on Friday 24 November, from 12:00 noon until 4:30 pm. It will begin with a light lunch and the opportunity to view a pop-up exhibition on students' experiences and activities after the First World War. The main part of the event will consist of sessions on peacebuilding, refugee relief, and anti-racism. Each session will comprise short presentations and a discussion with the audience. Together, we will reflect on the obstacles that campaigners have faced both in the past and present.

The event is free, but for planning purposes, we’d like everyone to sign up via our Evenbrite site by 21 November. For any questions about the event, feel free to contact Georgina Brewis (g.brewis@ucl.ac.uk) or Daniel Laqua (daniel.laqua@northumbria.ac.uk).

Posted by Histories of Activism at 13:45 2 comments: